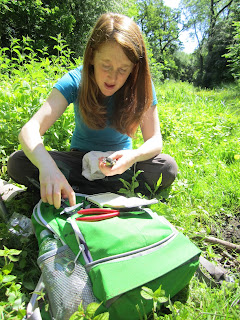 I'm a Junior Research Fellow of Churchill College, Cambridge, and a member of the Behavioural Ecology Research Group. I research dietary decision making in songbirds. My work is funded by the British Ecological Society and The Royal Society.

Before arriving at Cambridge, I was a NERC-funded postdoctoral research associate at the University of Glasgow, where I investigated the evolution of masquerade: that's when animals mimic the appearance of inanimate objects such as twigs and leaves. And before that, I did a postdoc at the University of Liverpool, researching the evolution of mimicry.

In 2007 I completed my PhD, entitled "The visual and behavioural ecology of countershading and other defences", at the University of Liverpool. I studied wild free-living birds in the field, and captive wild-caught birds in aviary experiments - the Novel World [video] system at the University of Jyvaskyla. I published four papers from my thesis, with one in Nature (Rowland et al., 2007 ), and received two prizes: the Thomas Henry Huxley Award from the Zoological Society of London (for best zoology thesis in the UK), and the Alfred Russel Wallace Award from the Royal Entomological Society (for best entomology thesis).